Thanks for visiting my site. It looks like you’ve landed on one of my older posts. Please check out my current work on technology and entrepreneurship starting on the main page GSMcNeal.com.

Drones and the Future of Aerial Surveillance 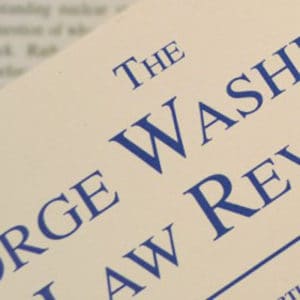 On February 15, 2015 the FAA announced historic regulations that for the first time in American history will allow small aircraft without onboard pilots — drones — to fly in the national airspace. Legal and technological developments have thus made it all but certain that drones will be a catalyst for new ways of thinking about privacy and surveillance. This is especially the case because the drones that the FAA has approved for operation in the national airspace (small aircraft under 55 pounds) are the exact type of drones that local law enforcement will be most likely to acquire and use. Thus, the battle over privacy and aerial surveillance will be fought in statehouses throughout the country. This article seeks to frame future discussions about how states will handle the privacy issues associated with aerial surveillance.

The article takes the counterintuitive position that technology may make unmanned aerial surveillance more protective of privacy than manned surveillance. It further argues that scholars and legislators should move beyond a warrant-based, technology centric approach to protecting privacy from aerial surveillance. Such an approach is unworkable, counterproductive, and may stifle efforts to enact more privacy protective legislative regimes. Instead, this article proposes that legal reforms should focus on excluding low altitude flights and surveillance coupled with imposing limits on persistent surveillance, requiring enhanced accountability procedures for data retention and access, and creating new transparency, accountability and oversight measures.

Material Connection: Some of the links in posts on this site are “affiliate links.” This means if you click on the link and purchase the item, my company will receive an affiliate commission. This disclosure is required by the Federal Trade Commission’s 16 CFR, Part 255: “Guides Concerning the Use of Endorsements and Testimonials in Advertising.”

The Terrorist and the Grid

Pennsylvania Inside Out: War on Terrorism: Greg McNeal

Thoughts on Innovation in Law Review Publishing (Part 1 of 2)

Thoughts on Innovation in Law Review Publishing (Part 2 of 2)

The Epitome of Selfishness

Some Preliminary Thoughts on the Bin Laden Operation