Thanks for visiting my site. It looks like you’ve landed on one of my older posts. Please check out my current work on technology and entrepreneurship starting on the main page GSMcNeal.com.

California legislators are looking to tackle the perceived problem of drone trespasses with a modified version of a bill that was introduced earlier this year.  Unfortunately they’ve gone too far in the most recent version of the proposed legislation.

This bill was originally a privacy bill, and it was innovative when it was first introduced.  Because it was originally very narrowly tailored and focused on prohibiting trespasses in circumstances where a drone operator was violating a landowner’s expectation of privacy, it struck an appropriate balance between innovation and rights.  The bill was narrow and careful in that it required plaintiffs to prove a series of elements to make their case.  Requiring multiple elements of proof is important as it protects rights and guards against frivolous litigation.

Here is some of the original language from the preamble of the legislation when it was proposed earlier this year:

Existing law imposes liability for physical invasion of privacy, if a person knowingly enters onto the land of another without permission or otherwise commits a trespass in order to capture any image or recording of the plaintiff engaging in a private activity and the invasion is offensive to a reasonable person.  (my emphasis in bold)

The key here is that the original bill created a cause of action only when someone was trespassing for a very specific purpose — to violate one’s privacy.  The bill did this by modifying California’s existing physical invasion of privacy law.  If the bill had stayed as proposed, to prove a violation would require a plaintiff to prove not only that the drone entered the airspace above a person’s property without their permission, but also all of the following things:

That’s a pretty sensible approach focused on privacy harms.  All four elements have to be proven, which means we won’t see spurious or vexatious litigation because the bar to litigation is high enough that someone isn’t going to sue unless their privacy was truly violated.  It also serves to protect First Amendment rights because it is narrowly tailored to address privacy harms, rather than being a broad ban on aerial imaging or the mere act of flying.

But those protections are no longer in the bill.  Now, the proposed legislation makes it a trespass if a drone merely flies below 350 feet altitude above someone’s property.  There’s no need to prove that the operator knowingly did so, there’s no need to prove that any privacy harm occurred, or that any image or video was gathered, and there’s no requirement that reasonable people find the action offensive.

Taking those proof elements out creates a piece of legislation that effectively prohibits overflights, without any showing that any harm has occurred.  This is not a smart approach as it may seriously stifle innovation and countless legitimate uses of drones ranging from journalism, to real estate photography, to power line and utility inspections.

I also wonder whether 350 feet is the right altitude.  We all recognize that landowners have some right to exclude aerial trespasses.  For example, a local jurisdiction could certainty pass a law prohibiting a drone from hovering at 5 feet above your back porch.  How far above 5 feet does that right extend?  It’s unclear, but the Supreme Court in the famous Causby case told us that “if the landowner is to have full enjoyment of the land, he must have exclusive control of the immediate reaches of the enveloping atmosphere.”  Unfortunately that still doesn’t tell us very much other than that there is some limit on the landowner’s rights when the airspace is not within “the immediate reaches of the enveloping atmosphere.”

In a white paper published last year, I focused on law enforcement drones and suggested that providing land owners with a 350 foot exclusionary zone above their property might be a way to provide them with greater privacy rights.  But, by the time SB 142 was before the California Senate Judiciary Committee I had a sense that 350 feet was too high, and I suggested to committee members that the limit should probably be lower — likely 200 feet.  (I’m in the process of updating a longer forthcoming version of that paper to reflect my evolving views, lowering my proposed limit from 350 feet to 200 feet).

Why 200 feet?  The rationale is pretty straightforward, the FAA has long required that obstacles exceeding a height of 200 feet be marked and lighted.  This regulatory approach has mostly ignored obstacles below 200 feet, leaving most of those issues to state and local land use laws.  If the proposed California law is to withstand a preemption challenge, it will likely need to steer clear of areas where the Federal government has traditionally regulated — in this instance that means keeping the focus on airspace below 200 feet.  Now drones aren’t obstacles, but the reference point is an important one as it suggests there is some airspace that the FAA has (with limited exceptions) not exclusively regulated.

We’re already seeing industry starting to propose 200 feet as the sensible limit.  The graphic below illustrates Amazon’s plan, which features a high speed drone transit zone from 200-400 feet and an area below 200 feet that is for localized traffic.  It’s a pretty good proposal, although one question is whether they are seeking to exclude certain types of drones from the 200-400 foot high speed corridor, which may unnecessarily limit non-delivery applications. 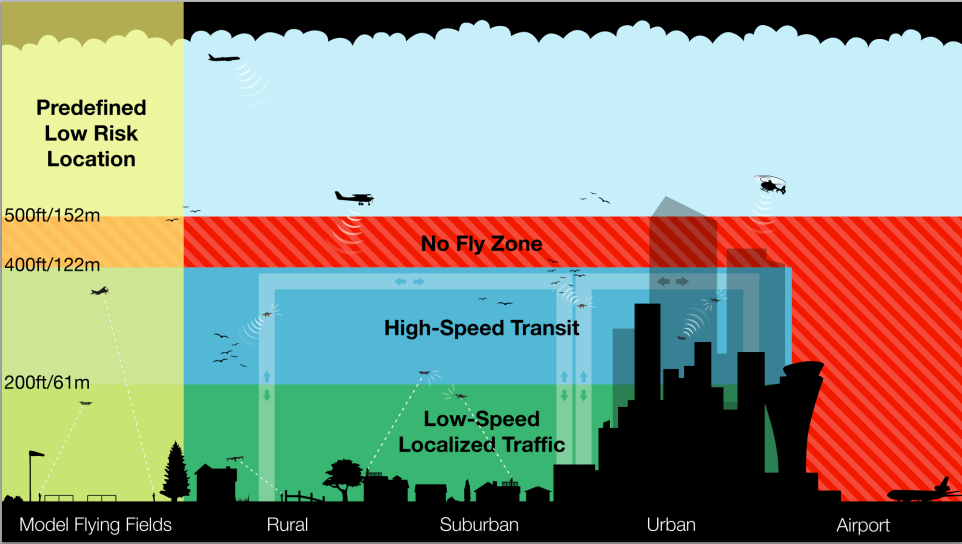 Amazon proposed a segregated airspace below 500 feet for the operation of drones on Tuesday. (Photo: Amazon.com)

Irrespective of the specific merits of the overall Amazon proposal, it suggests that industry is trending towards recognizing 200 feet, not 350 feet as the altitude that makes sense for a dividing line between state and local control of drones and federal rules for drones.  That is to say, the airspace above 200 feet may be the exclusive domain of the federal government and the airspace below 200 feet may be the domain of local control and perhaps may be the ceiling of property rights.

Which brings us back to California’s “drone trespass” bill.  I think the proposed legislation by reaching to 350 feet reaches too high, excluding overflights in an area where technology needs space to operate and develop.  We can’t predict what will come in the future, and we need to be careful to not overly limit technology while in its infancy, so that means we have to be very cautious in how we legislate.  It’s also important to recognize that from a legal perspective 350 feet is far more likely to fall in a preemption challenge, meaning the law will be likely short lived if signed by the governor as is.

None of this is to fault the legislators, this is an unsettled area of law with rapidly evolving technology.  Getting the altitude limit wrong is understandable — I made the mistake myself, thinking that 350 feet was the right altitude as it would provide a 150 foot transit zone for the safe operation of drones.  I now think that’s too restrictive —stifling innovation and free use of this technology, without providing any real benefits to persons on the ground.  The fact that well intentioned people can get this wrong, suggests that many more informed parties need to be involved in the process of creating sensible legislation.

Having more parties at the table when making rules is something that has already begun through the U.S. Department of Commerce’s multi-stakeholder process regarding drone privacy.  I had the privilege of speaking at the first multi-stakeholder meeting and I found that there’s a great deal that can be learned by having the right people in the room — especially when it comes to balancing privacy with innovation and individual rights.  Which is why the California bill is frustrating from a privacy perspective.  Taking away important protections that prevent unnecessary litigation doesn’t serve anyone.  It creates a circumstance where people are more inclined to sue even where there is no proof of harm.

It’s admittedly hard work to craft a law regarding drones that balances the rights and concerns of property owners with the rights of operators and the desire for technological innovation.  If the legislature wants to create a bill that will work, they should focus on preventing harms that aren’t already addressed by existing law, reinserting the deleted elements of proof of a privacy harm that were in the original bill and served as an important limit on vexatious litigation, and modifying the landowner’s airspace right to a more defensible maximum of 200 feet.

Material Connection: Some of the links in posts on this site are “affiliate links.” This means if you click on the link and purchase the item, my company will receive an affiliate commission. This disclosure is required by the Federal Trade Commission’s 16 CFR, Part 255: “Guides Concerning the Use of Endorsements and Testimonials in Advertising.”

The Terrorist and the Grid

Pennsylvania Inside Out: War on Terrorism: Greg McNeal

Thoughts on Innovation in Law Review Publishing (Part 1 of 2)

Thoughts on Innovation in Law Review Publishing (Part 2 of 2)

The Epitome of Selfishness

Some Preliminary Thoughts on the Bin Laden Operation