Professor Gregory McNeal, who is also the co-founder of AirMap, was appointed to the Federal Aviation Administration’s (FAA) Micro Unmanned Aircraft Systems Aviation Rulemaking Committee. Dr. McNeal was selected by the FAA and the Small UAV Coalition to work with other aviation experts to draft recommended performance-based standards and operation requirements for a new classification of UAS called micro UAS.  “I am pleased to be a part of the FAA’s efforts to establish regulatory guidance to this new class of UAS,” said Dr. McNeal, “Our industry is continuously evolving and I applaud the FAA for taking an inclusive approach to the rulemaking process.” 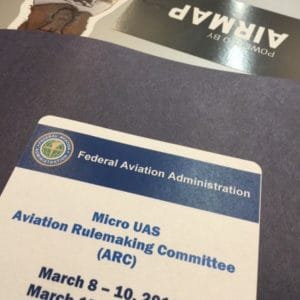 Dr. McNeal has been at the forefront of the intersection between technology, law and policy; he is one of the nation’s leading experts on public policy and unmanned aircraft. He delivered the keynote address at last week’s American Association of Airport Executives Airport Planning Design & Construction Symposium, the preeminent technical event for airport professionals. Additionally, Dr. McNeal will testify before the U.S. Senate Committee on Small Business and Entrepreneurship on March 10, 2016 at a hearing entitled, “Up in the Air: Examining the Commercial Applications of Unmanned Aircraft for Small Businesses.”

Dr. McNeal will be a featured presenter at the South by Southwest (SXSW) Interactive Conference in Austin, Texas on March 15, 2016. Along with the FAA’s Senior Advisor on UAS Integration and other thought-leaders, Dr. McNeal will discuss key policy issues impacting drones including privacy and safety, at a session called “Policies Impacting Drones and the Future of Flight.”

“Despite being in the news regularly, most people are unaware of the significant economic and societal benefits that drone technologies offer. I look forward to being a part of an effort to educate the SXSW community about the latest drone advancements and the effect public policy has on the growth of this industry,” said Dr. McNeal.

The Policies Impacting Drones and the Future of Flight panel will take place on March 15th at 3:30pm CST at SXSW Interactive at the Parkside in Austin, Texas.

About AirMap
AirMap is the world’s leading provider of aeronautical data and services for unmanned aircraft, commonly known as drones. Founded by experts in drone technology, aviation, and policy, AirMap knows the next century of aviation innovation is happening now, in the airspace below 500 feet. We have developed technology to provide accurate, reliable and trustworthy low-altitude airspace data as well as facilitate real time communication between drones and other stakeholders. AirMap’s solutions improve safety so drones can be a part of everyday life. We are rapidly expanding our global network of partners and clients.

Police Drones, the Fourth Amendment, and Drone Trespass — A New Case In Michigan

Do landowners have a reasonable expectation of privacy as against observations made by the government using drones at low...